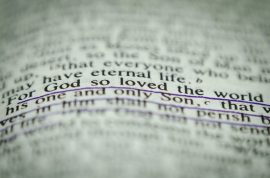 HOW DID EVIL BEGIN?

How is it that we, the inhabitants of planet earth find ourselves living in a world that is on the one hand, filled with incredible beauty – the awe inspiring animals big and small, the exquisite birds that sing their sweet songs, lush carpets of flowers, majestic trees, glorious sunsets, the beautiful blue sky, bright white fluffy clouds, the vast oceans and great lakes filled with fish, the sun moon and stars that we admire from afar, and yet on the other hand, we live every day with hate, crime, selfishness, disease, war and death. To many minds this is a source of great perplexity. We see evil at work on every side with its terrible results of misery and devastation, and we wonder why? Why? Why? We wonder how all this terrible depravity can exist in such a beautiful world under the supremacy of God, who the Bible describes as being infinite in wisdom, in power, and in LOVE.

For the answer, let us go back in time before evil came into existence, to when the universe was filled with peace and joy. All was in perfect harmony. Christ, the only begotten of God, was one with the eternal Father, the only being in all the universe that could enter into all the counsels of God. But there in the realm of God was one that chose to disrupt this perfect harmony. Evil originated with him, who, next to Christ, had been the most honored of God, and who stood highest in power and glory among the happy occupants of the Universe. Before his fall, Lucifer was the highest of the angels, holy and perfect. But instead of seeking to make God’s honour supreme in the loyalty and devotion of the innumerable numbers of beings that God had created, Lucifer wanted them to serve and worship him. And desiring the honour which the infinite Father had bestowed upon his Son, Lucifer coveted the power which belonged alone to Christ. Lucifer’s rebellion against God and His Son had begun.

The Son of God presented before Lucifer the greatness, the goodness, and the justice of the Creator. God himself had established the order of Heaven; and by deviating from it, Lucifer would dishonor the God who made him, and bring ruin and disaster upon himself. But this warning, given in infinite love and mercy, only aroused in Lucifer a spirit of resistance. Lucifer’s jealousy of Christ prevailed, and he became only the more determined to disobey God. Lucifer was full of pride in his own glory and he wanted to reign supreme. The high honors that God had bestowed upon Lucifer were not appreciated by him, and called forth no gratitude to his Creator. Lucifer delighted in his shining glory and exaltation, and aspired to be equal with God.

Leaving his position in the immediate presence of God, Lucifer began to spread his spirit of discontentment among the angels. Working secretly, and concealing his envy and jealousy of God, he endeavored to excite dissatisfaction concerning the laws that governed heavenly beings. Lucifer asserted that God’s laws imposed an unnecessary restraint upon the inhabitants of the universe, and he pretended that even though he was aiming to exalt himself by aspiring to greater power and honor, he was doing it in order to secure freedom and independence for all the inhabitants of Heaven, and once they had won this freedom, they would all attain to a higher state of existence. Discontent, envy and jealousy had never before existed in Heaven.

God did everything he could in His infinite love and wisdom to convince Lucifer of his error. Lucifer had forsaken his exalted position in the heavenly courts, yet if he had been willing to return to God, acknowledging the Creator’s wisdom, God would have re-instated him in his office. But pride would not allow Lucifer to submit. He stubbornly defended his actions, and he stated that he had no need of repentance, and he fully committed himself to war against his Maker.

God in his wisdom permitted Lucifer to carry forward his work, until his jealousy and animosity developed into active revolt. It was necessary for Lucifer’s plans to be fully developed, that their true nature might be seen by all. God had highly exalted Lucifer; he was loved by the heavenly beings, and his influence over them was great. God’s government included not only the inhabitants of Heaven, but of all the worlds that he had created; and Lucifer thought that if he could bring the angels of Heaven over to his side to join with him in his rebellion against God, the other worlds would give their allegiance to him as well. Even the loyal angels could not fully discern his purposes, or see where his disloyalty to God was leading.

Until fully matured, sin would not appear the evil thing it was. The inhabitants of the universe could not perceive the terrible consequences that would result from disobeying God’s law. In his dealing with sin, God could employ only truth and righteousness. Lucifer could use what God could not – lies and deceit. Lucifer had tried to pervert the law of God, and he misrepresented God’s government to the angels, he asserted that there was no need for law and rules in heaven. Lucifer made it look like he was the one who was seeking the good of the universe by doing away with God’s laws. The true character of Lucifer, and his real purposes, must be understood by all. His own wicked works must condemn him. The deceiver must be unmasked for the whole universe to see and understand.

Had God immediately eradicated Lucifer, the inhabitants of the universe would have served God from fear, rather than from love. The wicked influence of Lucifer would not have died with him, nor would his spirit of rebellion been utterly eliminated. God must allow evil to come to maturity. For the good of the entire universe throughout eternity, Lucifer must be allowed to fully develop his principles, so that his rage against the divine government might be seen in its true light by all created beings, so that the love, mercy and justice of God and the permanence of his holy law would be forever placed beyond all question. Lucifer’s rebellion would be a lesson to the universe through all eternity, a continual witness to the nature and terrible results of sin.

The working out of Lucifer’s rule, its effects upon both human beings and angels, would show what is the fruit of setting aside the divine authority. It would testify that with the existence of God’s government and his law is bound up the well-being of all the creatures he has made. Thus the history of this terrible experiment of rebellion was to be a perpetual safeguard to all holy intelligence’s, to prevent them from being deceived as to the nature of transgression, to save them from committing sin, and suffering its punishment. To the very close of the controversy in Heaven, Lucifer continued to justify himself. He denounced the divine law as a restriction of their liberty, and declared that it was his purpose to secure the abolition of law; that, freed from this restraint, the hosts of Heaven might enter upon a more exalted, more glorious state of existence.

With one accord, Lucifer and the angels that united with him in his rebellion against God, cast the blame of their uprising wholly upon Christ, and they claimed to be themselves the innocent victims of oppressive power, Lucifer and all his sympathizers were at last banished from Heaven. The same spirit that prompted rebellion in Heaven, still inspires rebellion on earth. And when Adam and Eve sinned through yielding to the deceptions of Lucifer, God gave an evidence of his love by yielding up his only begotten Son to die for the fallen race. In the atonement the character of God is revealed. The mighty argument of the cross demonstrates to the whole universe that the course of sin which Lucifer had chosen was in no way chargeable upon the government of God.

During the Saviour’s earthly ministry, the character of Lucifer, the great liar was revealed. Nothing could so effectively eradicate affection for Lucifer from the hearts of the heavenly angels and the whole loyal universe as did his cruel warfare upon the world’s Redeemer. The constant hatred inspiring the hearts of priests and people to reject his love, and at the last to cry, “Crucify him! crucify him!” – all this amazed and infuriated the inhabitants of the universe. It was Lucifer that instigated the world’s rejection of Christ. The prince of evil exerted all his power and cunning to destroy Jesus; his envy, revenge and hatred, raged against the Son of God while He hung upon the cross of calvary, and all Heaven looked upon the scene in horror.

Lucifer had revealed his true character as a murderer and a deceiver. It was seen by the inhabitants of the universe that the very same way with which Lucifer ruled the human beings on earth, who were under his power, he would have manifested had he been able to control the inhabitants of Heaven. Lucifer claimed that the transgression of God’s law would bring liberty and exaltation; but it was seen that the real result was misery, enslavement and death. It was also seen, that by his desire for honor and supremacy, Lucifer had opened the door by which sin had entered. And in order for Christ to destroy sin, he humbled himself and died; so that all Heaven would be able to see His justice revealed, both in the final destruction of Lucifer and in the eternal redemption of human beings.

But it was not merely to accomplish the redemption of the inhabitants of this little world that Christ came to the earth to suffer and to die. It was not only that human beings might regard the law of God as it should be regarded; but it was to demonstrate to all the universe that God’s law is perfect and unchangeable. Could the law of God been set aside, then the Son of God need not have yielded up his life to redeem us from its transgression. The death of Christ proves the law of God immutable. And the sacrifice to which infinite love compelled the Father and the Son, that the transgressors of His law might be redeemed, demonstrates to the entire universe – that love, mercy and justice are the foundation of the government of God. The cross of Calvary declares God’s law immutable.

In the Saviour’s last cry, “It is finished,” the death-knell of Lucifer was rung. The war that had started in heaven and had spilled over onto the earth, and which had been so long in progress was then decided, and the final eradication of evil was made certain. The law of God which Lucifer had tried to discredit as a sign of slavery, will be forever honored as the law of liberty. A tested and proved creation will never again be turned from allegiance to their Creator God whose character has been fully manifested before them as unutterable love and infinite wisdom.

“How art thou fallen from heaven, O Lucifer, son of the morning! how art thou cut down to the ground, which didst weaken the nations!”  Isaiah 14:12

God Will AnswerWhat Is My Purpose?

An Ant Considers the Universe
January 2, 2016

One thought on “How Did Evil Begin?”